The Chief Minister of Guernsey, Deputy Gavin St Pier
and the Minister for External Relations of Jersey, Senator Ian Gorst, visited
Brussels on 4-5 March 2020. The visit formed part of the regular political
level engagement by the Channel Islands with the EU Institutions. The Ministers
discussed the Channel Islands cooperation with the EU as existing non-EU
jurisdictions (“third countries”) in areas such as tax, tackling financial
crime, and protection of personal data but also how the Islands can work with the
EU on new shared challenges, such as climate change.

Their programme, arranged by the Channel Islands Brussels Office (CIBO), included meetings with the Permanent Representatives (Ambassadors) to the EU of France, Latvia and Slovakia; EU Justice Commissioner Didier Reynders; the principal adviser on the security union of the Commission Secretariat General; Stephanie Yon-Courtin MEP (Vice Chair of the European Parliament’s ECON Committee) and (by teleconference) Sirpa Pietikäinen MEP; the First Minister of Wales, Mark Drakeford  (visiting Brussels); and the Deputy Ambassador of the UK Mission to the EU. They also addressed a reception organised by CIBO.

“It was essential to again
meet with senior representatives from the EU Institutions to underline Guernsey
and Jersey’s commitment to maintaining our long-standing policy of being a good
neighbour to the EU, whatever the nature of the future UK/EU relationship.
It was timely to be able to do so in the same week as the start of the
UK/EU negotiations.”

“We were pleased to highlight
the particular contribution that Guernsey and Jersey can play, as specialist
finance centres, in the provision of some of the significant funding that is
going be required for the decarbonisation of the global and European economies.
It was clear that our green finance products should be an area of future
cooperation in helping the EU deliver the objectives of the European Green
Deal. “ 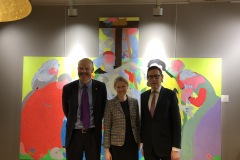 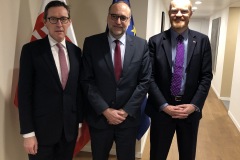 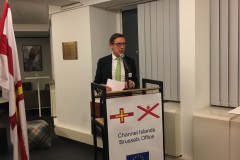 Previous No immediate change to Channel Islands relationship with EU following UK withdrawal
Next Coronavirus: Guernsey and Jersey responses include measures to protect EU citizens resident in the Channel Islands

The Governments of Guernsey and Jersey, in alignment with the UK, have suspended with immediate effect …